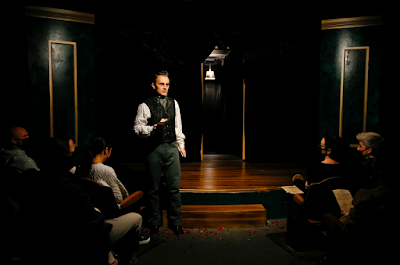 It’s may be almost 170 years since Gothic literature writer Edgar Allan Poe died under mysterious circumstances but in Broad Encounters immersive theatre production A Midnight Visit, he is brought back to life and entice his audience to face their fears in an evening of macabre entertainment. Audiences are left to wander through the maze of 36 rooms as they come across various figures from Poe’s life, characters from his stories and even the writer himself. What happens next depends on the path you choose to take.

We are initially greeted by an undertaker who prepares us for entry into an unpredictable and macabre dream world. With surgical masks over our faces to prevent us contracting any diseases (and to add to the unsettling anonymity of the evening) we begin our journey into the dark recesses of the mind. As many scenes play out simultaneously in this labyrinth, it is impossible to see everything unfold. This makes it difficult to piece together a structured narrative but choosing to see the evening as a series of vignettes taken from Poe's life and his writing, heightens the unease permeating throughout the production and allows you to focus solely on what is happening.

Of particular intrigue is The Raven, performed by Hudson Emery who perfectly captures its evil mischief. The Raven may display a big smile but there is much to fear from this living creature. It’s worth sticking with The Raven if your paths cross, as it encounters an array of characters in captivatingly grim scenes soaked with dread and apprehension including a puppetry / mirror image dance sequence with Cameron Macdonald who plays Roderick Usher.
Andy Johnston as Poe also delivers a brilliant performance capturing his slow descent into insanity as he begins to lose his grip on the world. Hannah Raven as the cruel nurse Ligeia exudes an eerie coldness that is perfectly matched by the overpowering antiseptic smell and bloodied bed sheets of the hospital ward.
As a Poe fan, it is incredibly impressive to see how his works are incorporated into the show and with almost 40 stories and poems referenced, there are many that I'm sure I missed. The production also includes a number of songs, and while they might be much more contemporary than Poe's writing, their renditions are perfect fits to this world. Emery's performance of Shakespeare's Sister's "Stay" in a cold and empty graveyard sends chills down your spine and Detective Dupin's (John Marc Desengano) cover of Kylie Minogue's "Confide In Me" is perfectly executed to an audience member after they are startled by his sudden appearance.
The design elements in A Midnight Visit are a source of constant amazement with immaculate attention to detail in each room. There is one room constructed entirely out of stuffed animals, which is much creepier than you'd think, and Poe’s bedroom is full of mysteries and puzzles to solve. If you're attentive (and daring) enough, you might even discover a few secret passages. The sound of a thumping heart beats throughout the rooms and if you're fortunate enough to find its location, the sound is almost deafening. 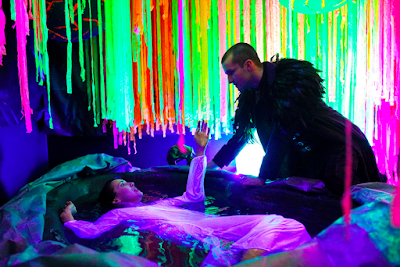 With shows such as A Midnight Visit, it is best to not worry about what you're missing out on and focus on the character you’re following or interacting with. Unfortunately, the evening ends sooner than you'd prefer with much left to unearth in the darkness. As with Poe's writing, there are traces of humour in this dream-world presented to us, but it is inevitably laced with the psychological horror of death and mourning that you are unable to escape from unscathed.