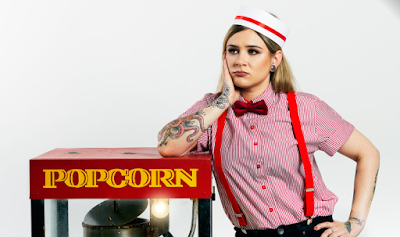 Green ensures that the stories she shares with us involve more than just herself standing behind a microphone and speaking. When she is telling the audience about her Centrelink fraud accusation, she creates a film noir environment with costumes and voice. Another scene plays out between her and a fellow sex worker watching TV and talking about their jobs as clients patiently wait in the next room. Her demonstration of the worst songs to strip to – including “Scatman (Ski-Ba-Bop-Ba-Dop-Bop)” – allows the audience a further glimpse into Green’s world. It is as much of a “show and tell” as possible with Bella Green Is Charging For It.

However, this isn’t show focusing solely on sex positivity or salacious sex stories. What Green is doing is explaining that her work place is just as professional as the office you work in. There are health regulations, customer service expectations (on both sides) and a legitimate exchange of services. At one point she compares her work to that of a brewery worker and surprisingly, the behaviours and requirements are quite similar.

Between anecdotes, Green projects various text messages she has received from clients and / or guys who only want a bit of titillation (ie. time wasters). These brief moments give Green time to step backstage and do a quick costume change and for the audience to consider what has just been said and how this might affect any preconceptions we had about sex work. Her text messages culminate in a most peculiar story and while its ending remains a mystery, it is a comedic curveball for the show.

Homer Simpson once said, “it’s funny ‘cause it’s true” and that’s exactly why Bella Green Is Charging For It works. These stories are not made up but lived experiences that help put a face to the countless female – and male – sex workers who are treated as outliers of society. Consensual sex is a wonderful thing, and no one should ever feel ashamed to either want to pay for it or to want to get paid to provide the service. In her hour of stand-up and sketch, Green is raising awareness of this but also delivers many laughs.