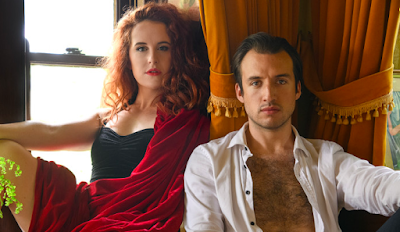 First The Very Good Looking Initiative taught us how to lead a better life through social media with CULL. Then they explored how crippling failure can be with Let's Get Practical! Live. Now they return to the Melbourne International Comedy Festival with their brand new show, Poopie Tum Tums. Performed by Honor Wolff and Patrick Durning Silva, the show will give audience members another look into the weirdly hilarious musings of the two and their desire to create something stupid, sexy and funny.

"Poopie Tum Tums is a show that we want to perform every night that makes us laugh and makes our parents uncomfortable and disappointed. A lot of people don’t know this about us but we both have massive egos, self destructive behaviours and a dream to become famous, so hopefully this does that," they tell me. "Basically it’ll be the two of us on stage making fools of ourselves, and making you laugh, cry and be uncomfortably aroused."

Despite their long history of working together, the duo are constantly surprising each other with their ideas. "We really enjoy hanging out A LOT and riffing off each other until we find something that makes us REALLY laugh. For some reason we find a lot of humour through tragedy, and there seems to be a lot of that right now so the world keeps on givin’," they say. "We’re also always looking to surprise ourselves - so when something is a bit too obvious, it doesn’t always hit our g-spot. But then again, when something is extremely obvious it makes us laugh a lot because we didn’t expect to do something so obvious."

The pair still remain cautious when it comes to getting the balance of everything they can out of a joke while still making it exciting and fun. "I think after working in comedy together for a few years we’ve come to realise that the audiences are more resilient than you think. As long as you build their trust, as long as you give a little, you can take a lot," they say. "We feel like going to a comedy gig is like going to a Grindr/Tinder date at 12am; some people want a nice, pleasant evening, but most of you just want to smash. That’s what we’re here for. Also, we find that it’s important to not be afraid and trust that if you just commit to the moment, someone is going to laugh eventually and if they don’t, that in itself is hilarious."

With their unique perspective on life, some might find it disconcerting just how many people lose themselves in a TVGLI show and get on board with the devilishly cheeky scenes presented to us, but this is exactly Silva and Woolf's intention. "We hope to start a cult and this is only the beginning. Nah, it is super lovely that people get into it, it’s reassuring to know that people still like to be silly and are open to something different, and gross and dark and sexy and incoherent. It’s also really nice after the show to have people describe to us their favourite bit, and most times it’s the most dark or absurd sketch."

While keeping the audience on their toes, there have been instances during their shows where the audience has surprised the performers with their reactions to their sketches. "During CULL we had people genuinely crying at one of our sketches about a lonely woman doing a nek nomination to Facebook backed by Nina Simone’s 'He Needs Me,'" they recall. "Otherwise we’ve had a couple of people walk out half way through CULL thinking they were going to see some light-hearted observational humour about Facebook and were confused by all the twerking and cat vomit. Also, one time Cate Blanchett came in and said “You guys are everythinggg, yaaaaaaaas!”. She’s so lovely in person. She also gave us a treasure chest and the secret to eternal youth, which is essential in this industry. Thanks Cate!"

1. Comedy is
Honor (H): Subjective, Stupid and beautiful / drunk crying.
Patrick (P): The best way to mask depression.
2. If you had to name your child after a vegetable what would it be?
H: Jeniffer.
P: Plant Stephanie.
3. Which reality TV show would you most like to appear/compete on?
H: Omg the fucking Bachelorette, or Would I Lie To You?
P: I’d appear on RuPaul's Drag Race so I can try my one liners like “PUSH IT UUUUUP” or “Now that’s what I’M EATING!” or “HEY WHAT  YEAH! I’m DIFFERENT!” And then I’d compete on Tidying Up with Marie Kondo.
4. How long would you survive in a zombie apocalypse?
H: Two years.
P: Two seconds. Either way becoming a zombie would really put the pressure off - we hate responsibility.
5. We will stay sane during MICF by going to the Festival Club and making out with each other on stage.