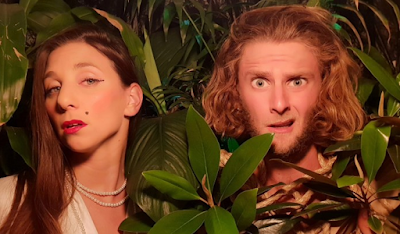 Trying to get Samuel Russo and Chelsea Zeller to describe their new sketch comedy show, Mrs Robinson Crusoe, is like getting two kids to talk about what they want for Christmas. They want to have it all and are excited about seeing what they actually get. Presented as part of the Melbourne International Comedy Festival, the two art makers and performers are collaborating once more in a clowning / drag production where a 1950s housewife finds herself marooned on the set of the hit reality TV show Survivor.

In this fresh sketch-fable-parody-party, Zeller and Russo play with ideas around space and time, sex and love, rock, roll and a bag full of wigs. But that's not all. "Audiences will be seeing two performers playing a shit tonne of characters from different worlds all colliding in our crazy little island paradise," Russo explains. "Lots of ridiculous accents and funny walks. You know. Classy, sophisticated stuff like that. Like Survivor meets Little Britain."

"We did have plans for a simulated storm scene, but we spent most of our budget on wigs," Zeller adds. Despite having performed in various shows over the years, it is always difficult to predict how audiences will respond to the humour in a sketch comedy, and it is something that Zeller is well aware of. "We probably won't feel like this show is ready until the day before it closes. So much of our comedy is influenced by the audience, so we really figure how the jokes land and what works at the end of a run," she tells me.

The pairs previous works (High Achievers at the 2017 Melbourne Fringe Festival and Massive Bitch at the 2018 Melbourne Comedy Festival) have been met with much praise and are a testament to the strong working and personal relationship the two share, which keeps them coming back together for more. "Sam and I have known each other for fifteen years. We were nerds and met at a drama camp in Brisbane where we became instant friends," Zeller recalls.

"Instant soulmates is probably more like it," Russo says. "I even thought I was in love with Chelsea for a short period before my balls dropped and I realised I was probably more into her brother Brodie. While we have made shows together before, we haven't made anything quite like this Mrs Robinson Crusoe. This one is very special. If you've ever seen Chelsea on stage you'll know she is a total fucking joy to watch. That joy is triple fold when you get to collaborate with her. She makes the world a better place. (Cue "naw")." Naw.


1. Comedy is sweet sweet joyful relief from the world around us.
2. If you had to name your child after a vegetable what would it be?
Chickpea. Not a vegetable though is it... still, sticking by it.
3. Which reality TV show would you most like to appear/compete on?
Survivor absolutely! Or any of the food ones.
4. How long would you survive in a zombie apocalypse?
We are both slow runners / loud talkers who get hungry really quickly, so you do the math.
5. I will stay sane during MICF by pastry.