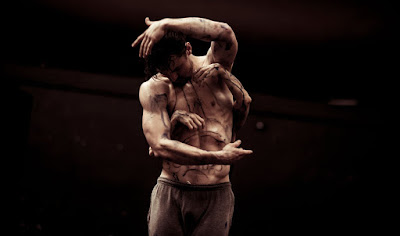 Cella (Latin for cell) is a minimalist dance piece by Narelle Benjamin and Paul White, who use and contort their bodies in intense solo and paired routines to uncover a history that we rarely consider. Cella allows the two dancers to explore the biology of our body along and the stories that it has to share.

The movements performed by Benjamin and White play to their strengths and often create stunning moments in how the body can be manipulated. While the beginning of the piece goes on longer than is necessary, the unison in which the two move their bodies as they writhe around the floor is impressive, evident of much time and effort made in ensuring they are in tune with the music by Huey Benjamin and with each other.

Karen Norris' lighting design is exquisite and allows for the size and depth of the space to change drastically, which works out well as the stage does feel like it's too big for this work. Playing with light, shadows and darkness, a staircase leading to a large platform suddenly appear that the two uses to create captivating illusions with their bodies, as Benjamin and White become one and beautifully float in the darkness. It is a powerful image and gradually culminates into an even stronger closing tableau.

While the choreography is interesting to watch, it was difficult to find a connection between this and "the physiological world we inhabit", as stated in the program notes. Similarly, if the intention of the show is to look at the biology and science of the body, it feels out of place to have the dancers wearing rehearsal clothes as their costumes, where the body is hidden from the looseness of the clothing and often distracting from the choreography.

There is clear artistry in the skill of the dancers but at times Cella seems to lose itself in the dancing. Further editing to tighten this production would strengthen its overall impact but perhaps the biggest difficulty with this piece is its exploration of how everything ties together.

Image credit: Pippa Samaya
Posted by Myron My at 13:08