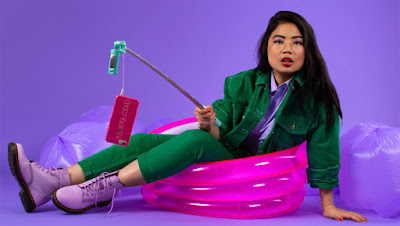 In the 2018 Melbourne International Comedy Festival, Margot Tanjutco wowed audiences with her performance as Juliet in the critically acclaimed Romeo is Not the Only Fruit. This year, she returns to the festival with her solo show, Vanity Fair Enough. Tanjutco will be bringing an hour of laughs with music, sketch and stand-up as she explores capitalism, materialism and happiness.

"I see Vanity Fair Enough as the apocalyptic Instagram feed of a self-loving twentynothing. It's a bunch of wild ideas woven together by mass consumption and impending doom," she tells me. "I initially wanted to write a show that almost defends materialism and the title popped into my head very quickly after that. It digs into my own materialistic tendencies and how society encourages those values and the consequences of them. I’m trying to understand how the world works in order to offer my own slices of truth. Those slices can be quite absurd but always grounded in something real."

Tanjucto began writing this show over a year ago that has naturally changed over time as it became clearer to her what Vanity Fair Enough was becoming about. "Let me tell you, 14 months ago this show was called Material Hurl and it was Not As Funny. It was so much more focused on Instagram and advertising but I realised what I wanted to portray wouldn’t hold in a live performance setting, it was maybe more fringe theatre than comedy festival," she explains. "Can you imagine preferring the title Material Hurl over Vanity Fair Enough??! But that was the headspace I was in and my ideas had to go through that before evolving into what I have now."

"While the show’s scope has expanded and has become sillier, I started with a personal obsession - fashion and shopping - that then led to the economy. I brainstormed a long list of song/sketch premises around the theme of capitalism and went through all the little thoughts I’ve left for myself on the Notes app over the last year. I knew I had a show in Vanity Fair Enough when I kept seeing articles being shared on social media about some of the things I explore in my show."

"So many things are getting worse and there is no sign of relief. The effects of capitalism and climate change are on everyone’s mind now more than ever and I wanted to know how to find the fun in that," Tanjutco explains. "This show required a lot of research and I bloody love research. I've obsessively deep dived and I'm still diving into it. The heavier research won't end up in the show because that's just tedious but a part of me now wants to be an economist! But people don't listen to economists so I'll stick to showbiz."


While Tanjutco's fascination and brain sharpening lies in stand-up, she been very open as to how this story will be told with its mix of music, songs and sketch. "Vanity Fair Enough is 70% songs, many of which are also sketches in themselves, but I love delivering stand-up and writing non-musical sketches," she tells me. "When I have a joke or idea, it’s a matter of finding out which format it would best be delivered. There are some ideas that started as songs and are now stand-up bits and vice versa. I enjoy having all the options!"

Tanjutco has been improvising since 2017 and these experiences have allowed her to be more bold and take bigger risks when putting on work. "Improvising has helped me become less precious, less self-conscious, and so much less nervous," she says. "I’m not an amazing improviser but it has taught me so much about generosity, listening to people, and trusting my instincts. Improv has helped me appreciate the uniqueness of everyone’s minds and has helped me become more comfortable in what I have to say as an artist and person. I always want to put on a good show but when it’s a solo show, so much more of me is on the line. There is more pressure because it’s only me who has the power to entertain these people and make them laugh for an hour - but it’s a pressure I crave."

1. Comedy is a lesson in clarity. A lecturer I had on games writing told me that and it still blows my sweet mind.
2. If you had to name your child after a vegetable what would it be?
Rocket Salad.
3. Which reality TV show would you most like to appear/compete on?The Bachelorette but make it gay.
4. How long would you survive in a zombie apocalypse?
A few months but will probably get killed for the stupidest reason like forgetting to lock a door one time.
5. I will stay sane during MICF by sleeping and taking it easy on the gin and tonics.