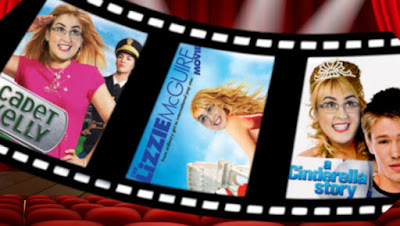 Hilary Duff may now be starring in the highly popular TV comedy Younger, but the American actress, singer, songwriter and author has had her fair share of movies and TV appearance that are probably best left forgotten. However, as part of the Melbourne International Comedy Festival, Nicola Macri is bringing awareness to three of these films with The Hilarious Duff Film Parody Festival. Throughout the two week run of her "festival", Macri will be performing Not The Lizzie McGuire Movie, An Cinderella Story and Cadet Who?, all through a queer and feminist lens.

The question of why Duff was singled out for this festival - and why these films - is a no-brainer for Macri. "There’s something about Hilary Duff that has burrowed into the souls and psyches of my generation. The idea for the show sprung up spontaneously when I saw a GIF that reminded me of Cadet Kelly and thought “I want to do a show that is just re-enacting a bunch of Hilary Duff movies.” It just felt right in my heart. Give the people (a niche but passionate group of millennial women) what they (you) want."

"I’ve watched The Lizzie McGuire Movie so many times and being set in Rome I knew I could work the Italian angle (I’m half Italian). I did a poll to see which other movies people were passionate about and A Cinderella Story was right up there with Lizzie, so I included it even though I barely remembered watching it myself. It turned out to be my favourite of the three shows. The fact that I wasn’t as nostalgically attached to it gave me enough distance to go into some critical discourse which gives the show a good kick," Macri explains. "Lizzie is mostly silly, joyous fun, and then on the other end of the Nonsense-Discourse spectrum is Cadet Kelly. Nobody voted for it but it’s my favourite so I’m doing it anyway, and I’m really leaning into the gay energy that a lot of us have gotten from the film, so that show has become basically a spoken word queer theory essay because why not?"

Performing in one show during the Comedy Festival can often be enough of a challenge, but performing three different shows in two weeks could be described as just a little mad. Not so for Macri. "Writing three different shows at once was exhausting and a very stupid nightmare. A two-week run is daunting but honestly performing these shows gives me more energy than it takes away," she says. "While every night is different because it's really heavy on audience interaction and improv, I get a bit restless after a few nights of the same show so having completely different shows to do is a blessing. The vibes of the three shows are different enough that mid-show confusion hasn’t been an issue as yet. Fingers crossed."

While Macri had studied film at university, her fate for comedy was sealed long before she completed her studies. "If you’re meant to be a comedian, no attempts down any other path are going to stick. I definitely believe that everything I’ve gathered during my eight years of uni studying law, Italian, linguistics and film, as well as being heavily involved in and catastrophically distracted by the UWA Pantomime Society, have equipped me very well for what I’m doing now - particularly with this show," she says. "When I graduated, one of my lecturers who apparently had a lot of faith in me suggested I come back in a few years and talk to students about my career. This probably wasn't what she had in mind, but I'm selling out shows and winning awards so they can't be too mad at me. As maligned as Arts degrees are, there really are infinite ways to apply those skills, and yelling about the irresponsible use of metaphor in Disney Channel Original Movies is one of them."

To those who are apprehensive about attending a show based on three films they may know very little about - or at all - Macri has some wise advice for you. "If you haven’t seen any Hilary Duff films but are among the many people who apparently thrive on becoming enraged by the joy of millennial women, you’ll have a phenomenal time! Truth be told, I originally felt that Hilary Duff novices should probably not come - it will be confusing and weird. There are definitely a lot of niche jokes that you’ll only understand with a working knowledge of the films. However I did have somebody show up at the Perth run who wasn’t a fan but just “liked seeing lots of different shows”, and she enjoyed it so much that she handed me a $5 tip afterwards so I guess it's got something for everyone to enjoy!"

1. Comedy is allowed to be all kinds of things and come from all kinds of people!
2. If you had to name your child after a vegetable what would it be?
I looked up a list of vegetables to answer this question and learned that there is something called fiddleheads. I will not call my child Fiddlehead. I feel like Radicchio doesn’t seem out of place in an Italian family.
3. Which reality TV show would you most like to appear/compete on?
I’m obsessed with The Bachelor despite being a lesbian-leaning asexual so I wouldn’t be great on that show but I WOULD like to make friends in a fancy house. If game shows count, Pointless is the true dream because I love nothing more than demonstrating that I know things that other people don’t know.
4. How long would you survive in a zombie apocalypse?
Oh, as brief a time as possible. A zombie apocalypse is just a great excuse to cease existing without hurting my family’s feelings!
5. I will stay sane during MICF by watching nature documentaries. It helps me put my life, struggles and triumphs into perspective.