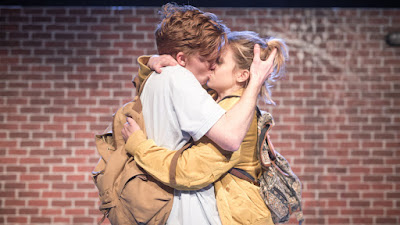 A text message to meet up for a sexual encounter in a park sets the wheels in motion in Emily Sheehan's Hell’s Canyon. While one sends the text and the other responds, neither Caitlin or Oscar are actually there to have sex. As we soon learn, there are scars that they both wear and the memories they share threaten to consume them both.

Oscar's brother, who Caitlin was dating at the time, has committed suicide six months ago. Oscar and Caitlin have not spoken since, drifting to extreme opposites lifestyles. Caitlin has become known for skipping school and fulfilling the sexual requests of the boys in her school, while Oscar has resorted to an isolated life, which includes eating his lunch in the teacher's staff room. The two are equally discontent with their lives and from their encounter in the park, decide to run away in an effort to shake up their worlds and see where things ends up.

There’s a rapid firing of brilliant naturalistic dialogue throughout Sheehan’s script, highlighting the impatience and frustration that Oscar and Caitlin would be feeling being in that grey area between teenhood and adulthood. While the idea of an escape to the fictitious Hell’s Canyon is great on paper, its purpose is awkwardly explored and it ultimately doesn't hold as much weight or gravity when compared to what is happening within the reality of Hell's Canyon.

Isabelle Ford and Conor Leach show a great understanding of their characters' motivations, not only in the present but in all the events we don’t know about, that have led them to this point in their lives. Under the direction of Katie Crawthorne, there is a desperate intimacy evident between the two through Caitlin's push-pull emotional states and Oscar's naive yearning for calm. Crawthorne has the set changes to Tyler Rae Hawkin's effective design made by the performers still in character, allowing the tension in the story to remain as objects are hastily placed on stage by Leach or are roughly thrown to the side of stage by Ford.

While the story could go a little deeper into the psyche of these teenagers, this is still a strong debut script by Sheehan. Hell's Canyon is a reflective piece of theatre in exposing the anxiety and dread that can be felt when trying to find your place in the world.