Stripped back circus in "A Simple Space" 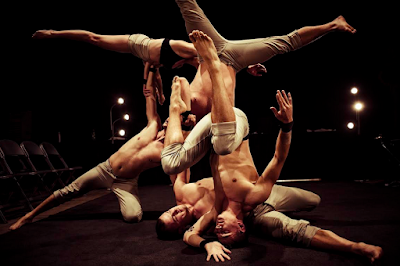 Earlier this year contemporary circus company Gravity and Other Myths (GOM) captivated audiences with Backbone, a brand new show presented as part of the Melbourne Festival. The show explored the theme of unity through strength and support with acts that left audiences awestruck by what the human body is capable. Those who missed it, missed out on an exceptionally original circus show, however there is no need to despair for the troupe return to Arts Centre Melbourne in January with A Simple Space. While the show differs greatly to Backbone, it still promises an exciting evening of circus by some of the country's top performers.


"A Simple Space and Backbone could not look more dissimilar. Backbone can fill huge theatres with 12 performers, a plethora of unusual props, magical lighting states and a haunting score while A Simple Space uses a small stripped back stage, placed as close as possible to the audience with only the simplest of lights run onstage by the acrobats," GOM member Jascha Boyce tells me. "If Backbone is the 30 piece orchestra, A Simple Space is the acoustic soloist. However the rapport between the performers and the playful nature of our work are a constant in both. This style that GOM is known so well for is the string that ties all of our creative endeavours together."
It is evident when watching GOM perform that these acrobats are completely in sync with each other and have an immense level of trust and faith among them that take years to develop. While the company formed in 2009, Boyce and other members had been training together much longer, building the foundations to what would eventually become known as Gravity and Other Myths. "The original founders of GOM all came from Cirkidz Circus School in Adelaide. I began training there when I was just four years old. It began like any other after school activity, similar to taking ballet classes or playing soccer, but soon became my passion. I continued at Cirkidz until I was 18 years old and it was where most of GOM first became friends." 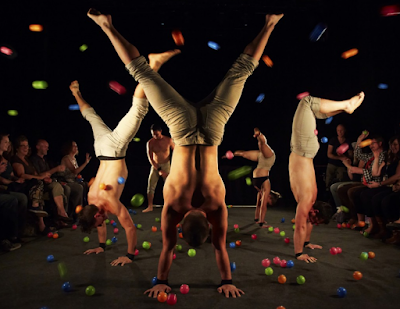 "We were all members of the performing troupe and trained together for more than five years until we started graduating from high school and we decided to create our first show, Freefall not really expecting to come this far," she says. "From the beginning we have always focused our energy into creating work that is accessible, engaging, honest and joyful. Our close relationships to one another have played a invaluable role in the success this type of work both emotionally and physically. While people have come and gone over the years, four of the five current directors of GOM are also founding members so we have been working together for quite a while now!"


"After spending the majority of our lives working, training, touring, creating, living and playing together we have such an incredible sense of trust with one another, allowing us to push our physical limits and demonstrate to our audiences the complexities and, possibly more importantly, the joy our relationships foster." Boyce explains.

Despite having bodies flung high into the air, the years of experiences Boyce and GOM have makes them slightly less dangerous than the audience can understandably be led to believe. "Surprisingly most of what we do onstage is less dangerous than driving a car! The majority of the skills we display onstage we have been training for years, so they are at a level now that we can perform them with confidence even when we may be a little distracted by the audience," she explains. "We do however enjoy adding skills to the show that are more of a challenge for us so when you see A Simple Space, you will notice moments when each of us needs to take a moment to focus - that is often when we are about to perform a new trick!"

Main photo credit: Steve Ullathorne
Posted by Myron My at 10:53