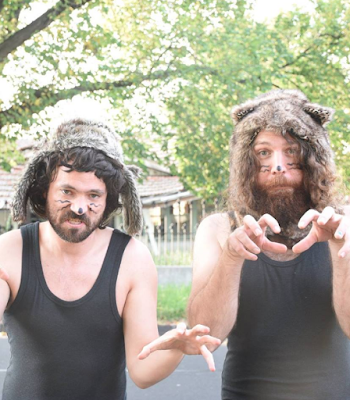 "In Survival Party, the apocalypse has happened. Gathered in a home somewhere in Melbourne, there is a small group of survivors. A small group of friends. They commune, two visitors arrive and a story is told," one half of the Lounge Room Confabulators, Stuart Bowden tells me. "It's about the power and importance of storytelling. It interrogates our relationship to the places we inhabit, and the memories that we store in them. There are also sing-a-longs and some pretty sweet dance moves performed by live wolves."

While Bowden and his Lounge Room Confabulators collaborator Wil Greenway have their storytelling focused individual shows on during the Festival - When Our Molecules Meet Again* Let’s Hope They Remember What to Do *Probably In Space and the way the city ate the stars respectively - they have still managed to squeeze in eight performances of this highly unique show.

"We are really excited by theatre that is stripped back to its simplest and most accessible form. We love the tension that is created when you take a familiar, safe, comfortable place like a lounge room and create a theatrical event in it. We hope to create a memorable experience that lingers in the place it has inhabited," Bowden explains. "There is also a beautiful tension between the audience who is familiar with the space and the performer who is an outsider; this tension is so often the other way around in theatre that is performed in a traditional theatre venue."

Of course, going from house to house to perform this show throughout the world has resulted in a number of memorable experiences for Bowden. "There's so many! Cameo appearances by pets and children, props catching on fire, costumes splitting at the crotch, going to the wrong house, performing in hot sweaty packed houses or performing to one person, hens parties (“sorry, no, we won’t take our clothes off”), cars driving away with all of our gear just before the show, a beautiful makeshift theatre constructed in a backyard, a performance in a basement with plastic over the carpet, and we once performed in a bank after hours. It seems like every show has a detail that sticks in our memories."

Bowden and Greenway met as students in Ballarat and bonded over their love of storytelling. In 2010 they made their first show that was presented at Melbourne Fringe, Unverified Stories from a Travelling Suitcase, which subsequently earned them a Green Room Award nomination for best independent production. The duo toured the show to Adelaide, Edinburgh and London where they have been based and have returned to Melbourne for their second show and to share their passion of storytelling and performing. 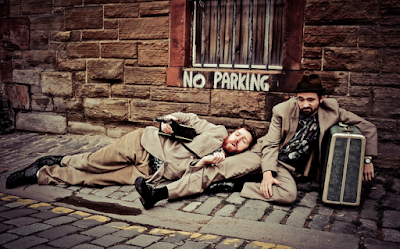 "I think storytelling is an intrinsic part of being human," Bowden tells me. "It is how we decipher, memorise, store and share information. I’m not really sure what all the ingredients could be for a good story, but the ones I really like are a sense of play, surprise, importance, beauty, musicality and series of discoveries that instigate change." Something tells me those lucky enough to nab tickets to this show will be in for one memorable final night on Earth.

Art is a human behaviour, something that some humans choose to do to pass the time between birth and death.
The best live show I've seen is Hugh Hughes' 360.
The best advice I was ever given is not sure, probably, "whatever you do, don’t forget good advice".
A song that describes my life is "My Love For You" by Francis Bebey.
A food I can't live without is pistachios.

Show Information - the way the city ate the stars