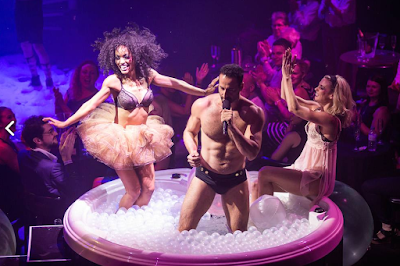 Set inside the Aurora Spiegeltent, Strut & Fret’s Blanc de Blanc is the newest blend of cabaret, circus and burlesque to make its way to Melbourne. A stream of scantily-clad men and women present a variety of acts intended to titillate and dazzle, and while there are some thrilling moments, this is unfortunately rarely the case. As such, the show ultimately comes across as a relatively mediocre variety night of dance and clowning, which over two hours begins to feel repetitive and tiresome.

Spencer Novich is absolutely hilarious as the right hand man to maitre d’ Monsieur Romeo. His clowning and physicality kept the entire audience bellowing with laughter and his mime montage of various sound bytes all thrown together was the highlight of the evening. His later pairing with J’aiMime for a second dose of this was even more impressive. Unfortunately the same cannot be said for his Romeo, whose entire presence throughout the show felt awkward and at times unnecessary.

Of the limited circus acts performed, it must be noted Hampus Jansson and Milena Straczynksi’s double aerial act showed strength and sensuality while the bellhop acrobatics by Masha and her spinning hotel luggage cart displayed strong skill and real concentration.
Despite the glaring presence of champagne throughout, there was neither a strong, fluid theme running between each act or an overarching narrative to make Blanc de Blanc a cohesive whole. The use of the spa felt tacky, as if it was imposing on the show rather than working as a character of it. Meanwhile, towards the end of the show, audience members are given five minutes to take selfies with the performers and while the intentions might be to connect with us, the overt self-promotion meant the show loses any charm it may have garnered along the way.

Strut & Fret delivered an amazing show with LIMBO during Melbourne Festival in 2015. Unfortunately they have failed to re-create that magic with Blanc de Blanc, with its lack of a clear purpose and the dearth of exciting acts.