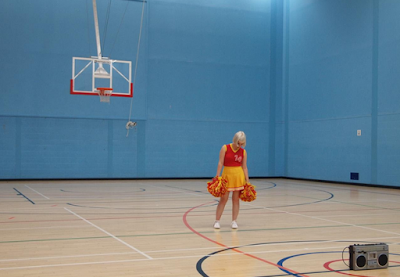 There is nothing quite representative of American culture than a packed auditorium or sports field of screaming high schoolers cheering on their team. The colour, the noise and the atmosphere can be electric and in Action Hero's Hoke's Bluff, this is vividly brought to life through a high-paced exploration of glorified dream chasing.

The space is authentically designed to resemble a basketball court with bleachers on each side and the school flag and mottos emblazoned on the walls. A dancing animal mascot is rallying the crowd, popcorn is handed out and loud music is playing that would have even the grumpiest and sullen of attendees find themselves surrendering to the spirit of the game.


What follows is a story that's been told countless times around heroic athletes, perky cheerleaders, first love, following your dreams and the ultimate crash of reality. Creators, writers and performers, Gemma Paintin and James Stenhouse, capture these moments honestly but with dramatic embellishment with co-performer and devisor Laura Dannequin ensuring they always stay in line and follow the ‘rules’ as a referee watching intently from the sidelines.

There are some finely crafted moments in Hoke’s Bluff including a scene of t-shirts being fired into the crowd with a cannon launcher. While this is happening, there is a sound of gunfire that drowns the room as Stenhouse momentarily uses his launcher as a machine gun that attacks the crowd, a harsh reminder of the all American nightmare of gun violence in schools.

However, the ending comes across as sudden and abrupt, and while this could have been the intention, imbuing some darker moments into the innocence portrayed, as mentioned above, might have had the build up to the finale be more dramatic. While Hoke’s Bluff is full of high hopes and cheers it doesn’t fully satisfy, it’s as if we are going for an amazing lay-up but never quite reaching the slam dunk.