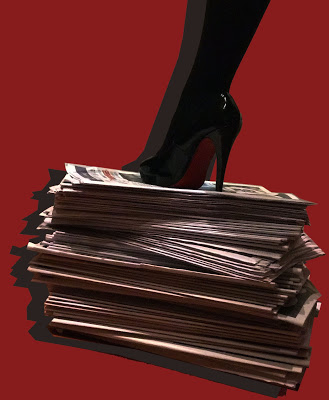 In Rob Young’s Crush, three employees working for a national newspaper struggle with keeping their personal lives outside of the workplace as well as the news. While the premise begins interestingly enough with its authentic office atmosphere and entertaining tête-à-tête between Johnny the journalist and Celia the editor, the writing struggles to remain on track with its intentions.

Young seeks to explore what happens when love and sex enter the workplace while at the same time looking at office politics and the lengths people will go to to break a story. Unfortunately the latter is barely probed and the outcome of these decisions, such as whether Celia believes the paper should profit from the death of her ex-partner, are more or less forgotten about as soon as they occur.

Furthermore, there is a lack of believable vulnerability from the characters due to the amount of time dedicated to the three of them discussing their feelings and experiences in relation to people who are not in the show instead of between themselves. As a result, there is little emotional impact throughout, where by the conclusion of the play it still feels like we haven’t fully scrutinised their fears and hopes on love.


Despite issues with the writing, Seb Muirhead manages to bring depth to Johnny’s bravado and sarcasm. His scenes with Mardi Edge (Celia) share a nice chemistry and they play off each other well. However there are times in the second half of the play where Edge’s delivery becomes awkward and her reactions appear forced rather than genuine. This is mostly evident during her scenes with Fiona Scarlett’s Laura as she attempts to show her contempt for the much younger and attractive version of herself. Scarlett does well as the new receptionist but emphasising her calculated thinking and cold intelligence would allow her big reveal to be all the more affecting.

In her directorial debut, Isobel Summers succeeds in keeping the momentum going with the material she has to work with. A few choices are questionable, such as Celia’s exiting and entering the stage towards the end, but Summers has an understanding of the story Young wants to share with Crush and works hard at reflecting these.