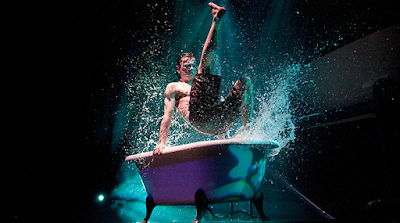 Bath time has never been this fun - and sexy - as with Soap. Direct from Germany, Soap is touring Australia with original and engaging circus acts that will leave audiences with their mouths wide open as they witness the re-interpretation of what circus can be. Presented as pat of this year's Melbourne International Comedy Festival, it's definitely a show that should not be missed.

The troupe - Adem Endris, Liudmila Nikolaeva, Lena Ries, Daniel Leo Stern, Mario Espanol and Moritz Haase - are on top of their game with their physically demanding and challenging acts. The acrobatics between Espanol and Haase create a firm highlight, displaying the performers' athleticism and strength, and also being a rare opportunity where I have seen same-sex relationships highlighted in mainstream circus. Nikolaeva has a commanding presence each time she appears on stage, as she executes a variety of tricks with finesse and skill.

Joining the cast on stage is Soprano Jennifer Lindshield, who adds an operatic tone to Tal Bashai’s musical arrangements. While this seems like a peculiar choice, the genre is integrated thoughtfully and creatively with the rest of the show. Lindshield's "Splish Splash" re-imagining is particularly entertaining to watch and hear, as is Nicole Ratjen commendable clowning ability in warming up the audience and providing laughs during the very smooth transitions.

Daniele Drobny's stage design of six bathtubs raised to various heights captures our attention before we’ve even taken our seat and its authoritative presence is never forgotten. The bath theme works well in creating moments of playful fun, like Endris' juggling striptease, to something more intense and intimate, such as the loved-triangle themed acrobatic performance by Stern, Nikolaeva and Ries.

Soap is world-class circus that is bound to have audiences' transfixed by what is being presented on the stage. It's full of surprising moments and acts that - while may have been done before - have never been done in this way. An extremely polished show that will have you looking at your bathtub in a different light.