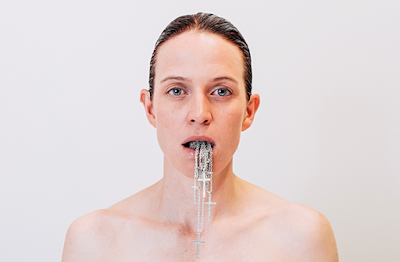 It was only a matter of time before experimental feminist theatre company The Rabble decided to take on the life of Joan of Arc, the woman who helped France win the war over Orléans and was later burnt at the stake for heresy and cross-dressing. Twenty-five years after her death, she was declared innocent of her crimes by the courts and was canonised in 1920. Her struggle and persecution is something that still resonates with us today, and with a fierce and poignant feminist perspective on her story, co-creators Kate Davis and Emma Valente bring her plight into a contemporary spotlight.

The show begins with a projection of an eye onto a scrim at the front of the stage. While it originally challenges the audience, there is a vulnerability and apprehension to the blinking eye that lingers in the room. The sound of burning logs and crackling wood as it continues to stare into the audience further builds on the unease and is a hint of what's to come. While we may know the story of Joan of Arc, there are still plenty of surprising and gripping moments to unfold in this production.

Joan's non-linear narrative structure explores significant moments in her life including her visions of angels and saints, the examination she underwent to ensure her virginity was intact and her execution by fire - spectacularly and awfully brought to life on stage. These vignettes are used as a way of exploring not only Joan's power and persecution but also that of all women. The focus is not war or history but the person, the woman, and The Rabble construct a strong and commanding voice and presence for her through the evocative performances from its highly talented and dedicated cast.

The four Joans (Luisa Hastings Edge, Emily Milledge, Dana Miltins, and Nikki Shiels) initially appear behind the scrim of Davis' set, with flashes of light illuminating them or capturing them briefly before the stage is enveloped by darkness once more. The lighting and music create a haunting rhythm which when paired with Valente's adept direction of the cast with their ritualistic prayer-like movements, fills the room with a supreme intensity, emphasising the devout faith held by Joan.

The projections designed by Marty Coutts are effectively used (particularly during Joan's aforementioned visions and examination), which allows for various complex feelings and thoughts to be cleverly depicted by the various Joans, complemented by the flawless lighting and sound effects.

While there are no authentic representations of what Joan looked like, in casting four women to play her, Joan allow her to embody womankind. While the only documents that exist of her speaking are from her trial, this superb production expresses powerful words, emotions and ideas from and to her, and by extension, offers a voice to women across time.

Photo Credit: David Paterson
Posted by Myron My at 12:37