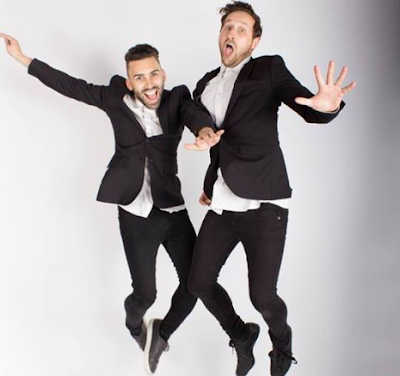 From humble beginnings in July 2014 to now being a Premier Event at the 2017 Midsumma Festival, The Sparrow Men - aka. Andy Balloch and Marcus Willis - have garnered a reputation as one of Melbourne's most esteemed improv acts. The two have been performing regularly with no script, no direction and no idea on what is going to come out of their mouths for 2 and a half years and could not be more excited to be returning to the festival where they debuted their first full-length performance in 2015.

"Improv is such an incredible art form, and the only one where the process is the actual product. Every night we get to write, direct and star in our own play. And like plays, they can be funny, sad, dramatic, absurd, linear, non-linear, thematic based, premise driven, tackle important issues, non-important issues, it can be meta, non-meta, interactive, non-interactive, in English or not in English. We can play humans, birds, or anything in-between, play 1 character each, or 20, maybe there’s a narrator, maybe not," Balloch tells me.

"That's what keeps it fresh for me. I think so many people hear 'improv show' and think 'comedy games'. Or worse, say 'I’ve seen improv, and I don’t like it', which is like saying 'I’ve seen a stand-up show, and I didn’t like it, so now I don’t like comedy'. As long as we’re making it up, it’s improv. Everything else is up for grabs. That almost limitlessness will always keep me coming back - and hopefully the audience too."

The amount of time the two have spent working together would probably be more time than your standard couple would spend together. The work they produce comes from much hardwork in refining their craft, and more importantly, making sure they are supportive of each other on stage. "Since Midsumma 2015, we’ve been doing shows almost monthly, so just the sheer amount of training and performing in those two years has meant that we’ve grown closer as friends and as performers, and the shows now are infinitely more polished," Balloch says. "I think like any good friendship, there has to be a really healthy balance of 'sameness' and 'difference'. Marcus probably tends to be a bit sillier than me, more absurd, and I tend to lean into emotions, and playing the 'straight man' more."

"I maybe look for connections a bit more than Marcus, where as he’s better at finding the game in scenes. But none of that is ever set in stone whether it is in the show as a whole, or in each scene. I see absolute joy in Marcus’ face whenever I play a big, weird character, and vice-versa, when Marcus pulls a move that ties three different story lines together, I just sit back and think 'how the fuck did he figure that out?!' The shows are so joyous for us, and so creatively satisfying, and that comes from us working together, in our own ways, to serve that."

Much like an athlete who doesn't know how well he is going to perform on the day, the two regularly work through various exercise that help them improve their skills. "We do specific exercises that train specific parts of our brains to help specific parts of the show. Listening is important in our shows, so sometimes we train in the dark, so all we can do is listen. Remembering names is also important, so we’ll find or create an exercise that helps with that. We also watch a lot of improv, and read a lot on it to. It’s a craft, and like any other craft, to get good at it, you have to practice," he explains. "Whilst we don’t train specific structures, we’re aware of structures that exist, but also of how stories are told. Think of a movie, any movie and then think about how was that movie told? What did it look like? Well, that’s what our show could look like. That’s how our show could be structured."

Despite the craziness and intense fun Balloch has performing on stage with Willis, his favourite part of improvising on stage are his interactions with audience members after a show. "Some of the most memorable moments are actually when audience members talk to me afterwards about the show, and how they felt something. Surprising people with feelings is the best," Balloch tells me. "And breaking Marcus is also the best, because he never breaks, so it has to be really funny or really stupid, both of which I love."