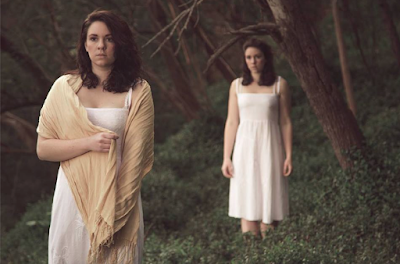 Melbourne-based theatre company, Panopticon Collective are dedicated to creating new Australian work that focus on national identity and social responsibility. Performed at La Mama as part of their Explorations season, their newest production, Goblins attempts to do just that, with mixed results.

The "goblins" in this work are six women from six historical eras ranging from 2000BC to 2015 who are telling six individual yet thematically similar stories. Each of these women face some sort of persecution for daring to have control of their mind and body and speaking up for what they believe in. Written by Jeni Bezuidenhout and Cassandra-Elli Yiannacou, each story is predominantly a ten minute monologue as we attempt to get inside these women's heads and see what drives them to be a courageous force as they confront their fears.

As we enter the venue, there are six bodies lying on the floor covered in white sheets. It is a powerful scene with which to begin with, as we think about these "dead" women and reliving the stories they have to tell. It links well with the writers' idea of showing history repeating itself and that women who dare speak up or act against social norms will be punished. The cast - Eva Justine Torkkola, Isabelle Bertoli, Kellie Tori, Luke Lennox, Bezuidenhout and Yiannacou - are, for the most part, strong and authentic in their portrayals.

However, I felt the stories themselves needed to be far more distinct from one another. Even across the various eras and with the different actors, by the time the final monologue began, I struggled to remember what each story was. While the narratives dealt with different ideas of persecution, the stories only offered a surface level that did not allow for richly drawn characters to present themselves to us. The story that feels most authentic and sophisticated though is the last, (Danielle's story), with the closing moments creating some strong visuals that were poignantly reminiscent of the show's opening.

The stage design by Marcus Verdi and lighting by Jaidan Leeworthy, are prime examples of how less can often be more. Both are able to build adroitly on the hostility and loneliness these women faced in their lives. There is however, a distinct lack of sound or music throughout Goblins, and there are times where its presence could have intensified the emotions and experience for both the characters and the audience.

Goblins is still a work in development and changes are likely. If the writers can focus on telling six iconic stories that have heart and emotion rather than a series of more generic narratives, I feel this could well go on to have a life outside of the Explorations seasons at La Mama Theatre.

Goblins was performed between 7 - 9 December at La Mama Theatre

* Original review appeared on Theatre Press on 10 December
Posted by Myron My at 23:10