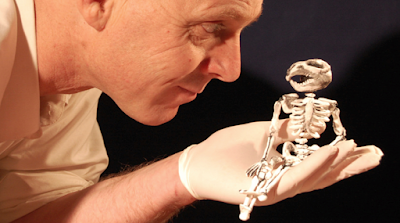 Every now and again, there is a show that is so unexpected and unusual that it remains vividly with you for quite some time after seeing it. Presented by Such As They Are and as part of the 2015 Melbourne Fringe Festival, Transplant is one such show. Performed at its uniquely designed installation space in a corner of Club Voltaire, it is a self-proclaimed medical fairytale that seamlessly infuses puppetry and performance.

As we wait outside the curtains of the performance, a nurse (Tim Ratcliffe) appears and before we know it, we are being prepped to assist in a surgery. Nothing is forgotten in the process, as we are told to swab behind our ears, have our nostrils examined and if anyone has been travelling overseas in the last month, well…


The whole procedure is quite surreal and preposterous but Ratcliffe does not skip a beat nor give any indication that any of this is an act. Even when the audience is overcome with laughter, he remains straight-faced and coldly serious. This is the reality we have entered.

Once we are ready, we are led to another room where a surgeon (Mark Penzak) is working hard at keeping his patient - who just happens to be a beautifully constructed puppet - alive. Unlike the first half of the show, the surgery scenes have a strong air of a fairytale world that has been ravaged by a plague. What follows are some highly engaging and visually enchanting moments where the less said about them the better the experience will be.

The two rooms have both been immaculately and authentically designed in Transplant. The lingering smell of disinfectant in the prep room shows that no attention to detail – whether visual or not - has been spared. The same can be said about the puppet design and puppetry by Eliza-Jane Gilchrist, whose creation and mechanics find the right balance of real and make-believe.

Transplant is a highly entertaining evening that ensures a full sensory experience for its audiences as they explore ideas of life and death and humanity. Due to the nature of the show, it is limited to small number of audiences at a time, so book ahead for this one and enter Such As They Are's beguiling fantasy world to see what awaits you.