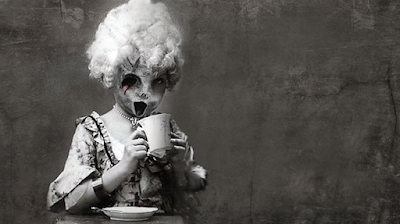 Little Vaginia is having a tea party and we are all invited! Presented as part of the 2015 Melbourne Fringe Festival, Little V’s Terrible Tea Party is a dirty little cabaret that brazenly explores the darkest recesses of morality and perversions where our hostess will also be revealing a big surprise!

Yasmin Mole is perfect as the unhinged and somewhat psychotic Little Vaginia. With her big curly hair and pink frilly dress, she is a life-size version of the dolls that are scattered along the stage. Her wide innocent eyes are unsettling as she sings about abortions and rape and her quavering voice is constantly on the brink of losing her self-control. Joining Mole are Charlotte Righetti, David John Watton and Jack Lad as the three clowns, and their physicality, facial expressions and their individual character traits are all well constructed.


The detailed set design adds a strong visual element to the show, with its abundance of dolls, puppets, toys, teacups and other childhood items. However, upon closer inspection, you notice that toys are ripped or broken, puppets are suicidal and teacups are shattered pieces that are held together by glue, enforcing the idea that our childhood ideals are so fragile and fleeting that at some point we have to let go of them and face the harsh and scary realities of the world.

Little V's is unashamedly daring and bold and there is nothing that the show won't talk about and nowhere the show won't go. This is more than clear in its rendition of The Sound of Music's "My Favourite Things" that would leave Maria von Trapp absolutely mortified. Other highlights include the chastity-endorsing song, "You're Never Fully Dressed Without A Hymen" and the random but very unsettling cameo by Santa (Martin Jones) with its realisation of just how grim "Have Yourself A Merry Little Christmas" can actually be. There are moments when the transitions to the next song or performance is a little abrupt or the delivery of punchlines in Little V's don’t quite hit the mark with the audiences but I feel this is also part of the charm of the show; leaving the audience unsettled and not quite sure how far the performers are going to take things.

Little V's is probably not going to be everyone's…well, cup of tea, but if you're happy for dark confronting matters to be discussed in a direct and humorous way, then it is definitely a show to watch. After all, don't you want to know what Little Vaginia's big surprise is.

* Original review appeared on Theatre Press on 2 October
Posted by Myron My at 17:45