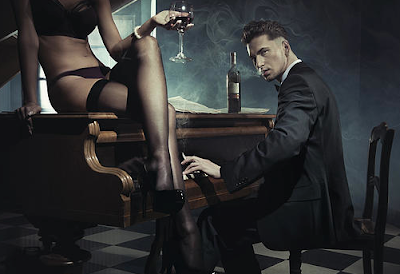 Bordello, the newest production from The Owl and Cat Theatre, is an immersive theatrical experience revolving around one fateful evening at a brothel. We are free to explore the three storey building of the well-known venue and follow the interlocking stories between the two owners of the brothel, Yvonne and David, its three employees, Trisha, Frankie and Cherry, and two of its clientele, Harry and Mathew.

This is very much a voyeuristic experience as the audience wanders around the premises, watching secret conversations and some highly intimate moments take place. Audience members are required to wear plain black masquerade masks throughout the course of the evening, which feels like a buffer between passively watching the story unfold and spying on these character’s lives.


Even though the story unfolds via multiple scenes being acted out simultaneously from various rooms in the venue, Thomas Ian Doyle’s script is so well constructed and thought-out, we can gradually put the pieces of the story together and understand the nature of the relationships between the characters. The pacing of the story along with the snippets of intriguing conversations and scenes we watch, allows us to be absorbed by the world around us. However, the script itself needs some work in placing us in the time period that we are supposed to be in. Despite the costumes indicating a 1920s environment, the words and language used were more suggestive of a modern vernacular.

Aly Calder is brilliant as Frankie, one of the employees at the bordello. Despite the character’s roughness, Calder very clearly shows her innocence and naivety allowing Frankie to come to life. Similarly, John Frankland as Mathew does well with his characterisation and building on his character's emotional development. However, the rest of the cast need to work on creating an authenticity in establishing their characters’ thoughts, words and actions. There are many scenes that lack the passion or the rawness that a piece of work such as Bordello requires to be a success.

Bordello is definitely a great concept and offers an immersive entertainment opportunity I've not been able to experience for quite some time. It is a unique piece of theatre that is worth watching, but required a clearer creative process underpinning its development in order to elicit a stronger response from its audience.

* Original review appeared on Theatre Press on 15 October
Posted by Myron My at 00:00