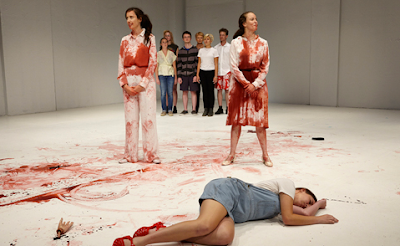 I went to the theatre where theatre is theatred…and it was magical. And deadly. And Bloody. But magical. My thoughts upon exiting Post's Oedipus Schmoedipus. Using death scenes from every major play in classical literature, Zoë Coombs Marr and Mish Grigor take us on a journey of dying that pretty much covers every emotion you can think of, because that's what theatre does to people. Emotions.

It's a bloody and confronting start to the show as Post take a tongue-in-cheek approach to a myriad of gory famous literary deaths to the soundtrack of Rihanna and Eminem's "Love The Way You Lie". There are disturbingly hilarious stabbings, digestion of poison and severing of limbs, but none are more powerful than the first 30 seconds. And that is all I will say on that.

When they have been killed to death, they are joined on stage by the chorus (25 volunteers) and together they explore the concept of death. This is where the real fun begins, as you watch these people perform in this unrehearsed piece of theatre. They take their direction and spoken cues from a tele-prompter as they act out various scenes revolving around death, and to some extent, life.

As an audience member it's exciting to watch these volunteers, because you can see the excitement in their eyes as they perform their scenes. As Grigor said in a post-show Q&A, it is scripted and directed to the second but you just don't know what is going to happen each night having 25 people on stage, so that moment of spontaneity or improvisation could happen at anytime, which is why there are so many scenes that are such a joy to watch.

Marr and Grigor have wonderful stage presence and the enjoyment they are having on stage is evident. For such a "serious" topic, there are many laughs to be had in Oedipus Schmoedipus, which is probably why the one honest, truthful scene hits so hard.  Appearing as ghosts draped in a white bed sheet, the volunteers walk on and off and around the stage. Eventually only one is left, and as she removes her sheet, she stares out to the crowd and announces, "I am going to die". She is gradually re-joined on stage by the rest of the volunteers as they all state similar thoughts.

As mentioned earlier, there was a post show Q&A in which the performers, joined by Natalie Rose (the third member of Post) discussed their creative process, working with volunteers and the reactions that people had when the show was first performed, where despite the warnings of "violence, blood, death and suicide themes", children were still taken by their parents. This show is not for the squeamish but the blood really is necessary to truly capture the idea of death and dying.

I will be one of the volunteers on Saturday's shows so I am very excited to die! Will report back on my experience then…