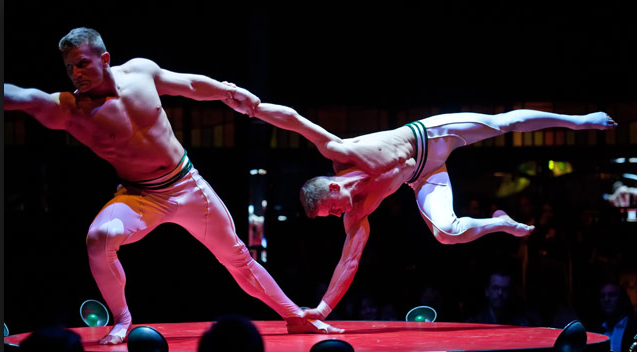 In 2013, I had the good fortune of working front of house when Spiegelword brought its show Empire to Melbourne’s Crown Casino. I was able to repeatedly watch a variety of world-class artists performing in some highly skillful and often death-defying acts, which also proved to be an exhilarating experience for audience members. Fast forward three years and Spiegelworld have returned their spiegeltent to the Crown Casino rooftop with Absinthe.

Inspired by cabarets of late-19th century Europe, Absinthe is a variety of burlesque, circus, song and dance that will appeal to everyone. Given the theme of the show and the physique and strengths of the performers, there is also quite a bit of flesh on display and plenty of sexual innuendo and some not so subtle sexual humour by the hosts, The Gazillionaire and his sidekick Penny Pibbets.


Now I understand that given the nature of the show, there is a need to be cheeky and funny and even controversial but the hosts lacked the warmth and the familiarity that was accomplished so well by the hosts in Empire. It led to some highly awkward moments, such as pulling two male members out of the audience and having them give a lap dance to a female audience member. It was extremely uncomfortable to watch as these men took off their clothes and shook their ass in a woman’s face and touching her. Fortunately for everyone involved, it went smoothly but looking around the audience, there were clearly a number of people who did not find this funny in the slightest.

The acts themselves however were mesmerising and frightening at the same time. Los Dos Tacos (Belarus duo Aliasandra Yurkavets and Andrei Sizonenka) and their parallel bars act was by far the highlight of the evening, performing tricks where landing even a centimeter off would have proved disastrous for them and quite possible for the audience. Another favourite was the Duo Strap dance routine by Americans Jacob Oberman and Maika Isogawa; creating a moment that allowed our hearts to stop racing so fast but displayed some beautiful moments on stage with their aerial ballet.

Sadly, the high wire finale by The Frat Pack lacked the suspense and the wow factor required to end the night on a high. There were stronger, more thrilling acts that were performed earlier in the evening that would have been more suited for the finale spot.

Although it’s no Empire, Absinthe still manages to amaze and leave you gasping with your mouth hanging open. These are performers who are at the top of their game and it is probably one of the few chances you'll ever get to see them perform. Despite its flaws and faults, Absinthe is still a highlight of the year so far.

* Original review appeared on Theatre Press on 29 April.
Posted by Myron My at 22:38