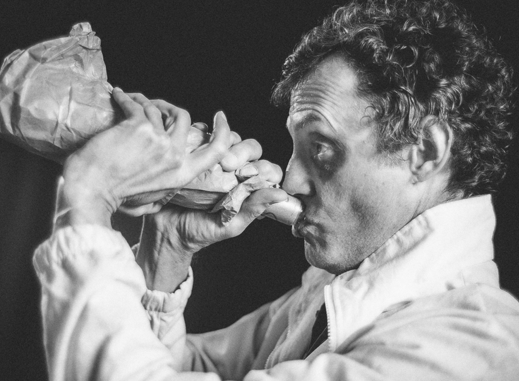 A wet house is a hostel for alcoholic homeless men and women, where they can drink and sleep as much as they want with no expectations for them to be rehabilitated. They are more or less, the people that society has given up on. In Red Stitch's production of Paddy Campbell's Wet House, we get an insight into the lives of three residents and three workers of a wet house, each one struggling with their own redemption and reason for being.

Wet House is based on Campbell's first-hand experience of working in a wet house and you can see how effective a story can be when the writer well and truly knows what he is writing about. Not a single scene is wasted, no dialogue is filler, no movement is pointless. Everything that happens in Wet House has a purpose, and with six different stories being told, the pacing is controlled well and is never difficult to follow.


The performance opens with colleagues Helen (Caroline Lee) and Mike (David Whiteley) going through the handover of their shift. The dark humour used throughout is disturbingly funny and highlights even more the issues that the script is raising. The arrival of new recruit Andy (Paul Ashcroft), with his idealistic and simplistic views on helping these people comes into great conflict with the realities of the job as well as his relationship with Helen and Mike.

Wet house residents, Dinger, Spencer and Kerry (Nicholas Bell, Dion Mills and Anna Sampson), each have their own unique story to tell, but at the same time, their story is universal. Mills in particular is exceptional as Spencer, bringing a vulnerability and sympathy to a character we should revile against and be disgusted by. The scenes between him and Whiteley are extremely intense to watch which is due to the strong performances and fearless directing by Brett Cousins.

Sophie Woodward's set design captures the bleak environment of despair that these people face day in day out. There is a creative use of the space in the theatre that I have not seen before which draws you further into this world and story. Costumes have been used to give more life to the characters and build on their personalities.

Red Stitch's production of Wet House opens discussion on alcoholism and how we support those who are seen as beyond help and how the intention to do good is ultimately never going to be better than action. It is an emotionally draining show but it is a show that needs to be seen.