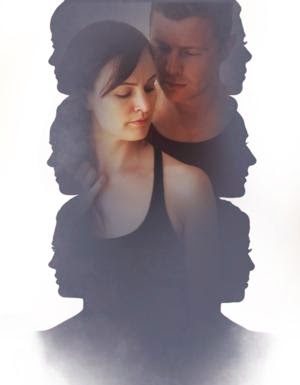 Every week in Australia a woman is killed by a current or former partner. It is an astonishingly frightening statistic and yet doesn’t seem to be reported by much of the media. Produced by Goldfish Creative, Rachael Blackwood’s new play Kindred brings this issue to the surface as she explores one woman’s struggle to escape from a violent relationship.
We are introduced to this relationship between Princess (Aimee Sanderson) and Knight (Ben Ridgwell) through the eyes of Princess’ various “personalities”: the childlike Minnie (Jessica Martin), the sexual Selina (Madeleine Mackenzie), the motherly Faun (Gabrielle Sing), the wise June (Aisha Jakszewicz) and the aggressive Diana (Blackwood herself).
From the initial fairy-tale beginnings of meeting the charming knight, through the gradual abuse suffered by Princess, right up to the difficult-to-watch final moments, Blackwood’s script is brutal, honest and unflinching.

There were instances where scenes got repetitive however, such as arguments between Knight and Princess in which he would storm out only to return and demand that Princess rectify the situation. Whilst it showed the cycle of helplessness that Princess was feeling, some more overt variation to these scenes would have resulted in higher audience engagement.
I was extremely impressed by the five women in the “personality” roles, as they all seem to have grasped their personas thoroughly and successfully. From the individual ways they smiled and even the unique ways they looked at each other – they were the true embodiments of Princess’ inner turmoil. The interactions, dialogue and tone used between them highlights the combined skill of Blackwood, the actors and director Lisa Treloar.
However, their monologues directed at Knight seemed out of place with the rest of the natural dialogue. Having them engage in long-winded poetic speech to express their thoughts resulted in scenes not seeming as authentic as they could have been.
Sanderson does well with what is the most challenging performance in Kindred. She found the right balance of a hopelessly-in-love yet utterly petrified person and as Princess sunk deeper into fear and despair, Sanderson ensured the audience felt exactly what she felt. Unfortunately I was severely underwhelmed by Ridgwell’s Knight. He seemed to struggle playing the nuances of the character and his delivery felt flat and almost monotonous, except for the scenes when he was shouting at Princess.
Overall, Kindred is a strong production with an important message to spread. With some fine-tuning in scripting and performance, it will be even more effective in raising awareness and provoking discussion and action over violence against women.
Venue: Revolt, 12 Elizabeth St, Kensington
Season: Until 13 December| 7:30pm, Sat 2pm
Tickets: $25 Full | $19.50 Conc
Bookings: http://revoltproductions.com
*Original review appeared on Theatre Press on 11 December 2014
Posted by Myron My at 15:37