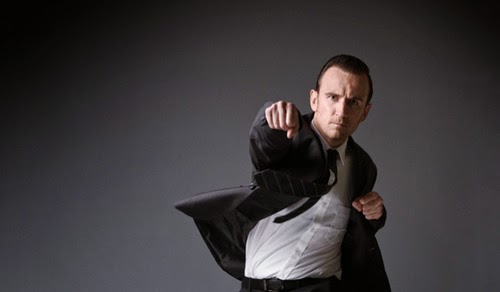 In Tomás Ford's one-man cabaret thriller, The Final Chase, we follow a secret agent as he attempts to find his missing girlfriend while simultaneously trying to track down his arch-nemesis. It proves to be a case that ends up fatal for one of the three as the audience is taken along this exhilarating ride.
Clearly there can be no secret-agent show that isn’t slightly inspired by James Bond, but there is also a little witty bit of Maxwell Smart and possibly a sliver of Austin Powers stirred into this mix. However, Ford still creates a strong character in his flawed and troubled yet calculating agent who is damn good at what he does – killing people.


Throughout The Final Chase, you can see in Ford’s eyes that he is committed to the belief that all this is actually happening. When he’s acting, when he’s singing (and boy can he sing) and when he’s out in the audience, he doesn’t drop the persona or the reality of his world once.
On the surface, the songs performed by Ford serve to progress the story at the right pace and to lure us into this shady world. Go a little deeper and they also allow us to get into the mind of this secret agent as he teeters on the edge of a breakdown due to the burden of his job. There’s a running theme with all of Ford’s songs of how much more can he sacrifice before he loses everything?
I did have a minor quibble with the ending however. Whilst narrative-wise it was strong and suspenseful, the closing song felt unnecessarily long and lost some of the impact of what was transpiring. The final moments could have been more effective taking place on stage rather than the back of the venue with people having to crane and turn behind them to catch a glimpse of it.
All the other elements come together seamlessly to bring the story of an unbalanced secret agent to life. The Final Chase is funny, intriguing and sexy but more importantly, a damn well thought-out cabaret.
Venue: The Butterfly Club, 256 Collins St, Melbourne
Season: Until 23 November | 6:00pm
Tickets: $32 Full | $28 Conc
*Original review appeared on Theatre Press on 22 November 2014
Posted by Myron My at 19:37