So another Melbourne Fringe festival comes to an end and so I present to you my TOP 10!
If I reviewed the show on an official basis, the link to the review is attached. 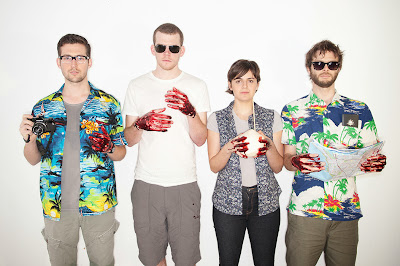 Four young theatre makers take an adaptation of Battle Royale (an amazing Japanese movie) and create it for a Philippino audience. The response was something they never expected and here they tell us their story.

I really enjoyed this: it provoked some intelligent conversation about responsible theatre making and what in fact those responsibilities are. They are not arrogant to tell you the answers, but succeed in getting you talking about it.

This was very much a love it or hate it show as I know people who felt they were taking advantage of what had happened and trying to capitalise on it and had not really expressed any regret over what had happened. I personally, don't believe they need to.

Here is a clip I found on YouTube of "Battalia Royale"...

I was a bit hesitant about this one, purely because I hate anything Western but I know Rama Nicholas is an amazing performer so I took a punt and I am so glad I did. A one woman spaghetti-Western play in which Nicholas plays about 13 characters (might be more) - all of which are believable and real, even the talking horse. In Death Rides A Horse, Nicholas created a suspenseful story that has hilarious and tender moments and lots of unexpected twists.

There are some great musical moments - including "Whores Have Dreams" which is in the video below... 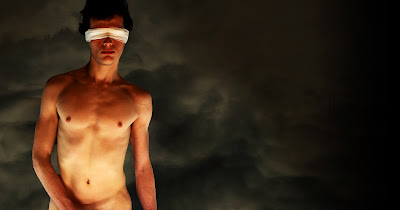 Written by Michael Gow, this is pretty much a whole bunch of stories on the mythology of God based around Orpheus - who in this adaptation is spreading the words of free love and same love. Knowing very little on the mythology of the Gods, it was a bit overwhelming with 13 actors playing 33 different characters and some for fleeting appearances but the theme of love, death, revenge and power are universal so it's easy to follow this intriguing story. Brilliant performances by the two leads - Madaline R. Ryan and Cazz Bainbridge but I was disappointed and confused by some of the other casting choices.

And what a mad party it was. Immersive theatre at its best.
Based around Alice in Wonderland, we are treated to dance, vaudeville, burlesque and circus acts.
But before the show begins, you get to walk around the space which has been brilliantly transformed into Wonderland and interact with its zany and peculiar residents. Some extremely talented and committed performers but I felt at times, the performances could have been a little more daring or "dangerous".

Directed by Kerry Armstrong, and another fine example of the type of theatre that La Mama is committed to showing. Laura Wheelwright and Lee Beckhurst play two strangers who meet over a chance encounter who may or may not end up in love.
Based on William Mastrosimone's play, it slowly sucks you in to Rose and Cliff's world and there is a level of voyeurism that is hard not to feel.
It's a demanding play and one which apparently many actors use as monologue scenes, but I feel like the cast and director nailed it here.
Not surprisingly, a completely sold out season.

Another one woman play but this one is a little more straight forward. A suspenseful story in the likes of Alfred Hitchcock's classic, "Rear Window". A man moves into an apartment building and his new neighbour spies on him and his daughter. Upon chatting to him, the man claims to not have a daughter. Who is the girl? Is there a girl? Not everything is as it seems here.
Great work by Meredith Penman on playing Ann and ever so slowly allowing her to unravel and having you guessing who is the villain until the very end.

Another win at La Mama, this one being a one woman (again) comedy about 5 women who all are spoilt in some way or another. Liz Skitch has created some hilarious and fun characters for this show and it's not so much the story here but the ignorance and the lack of awareness these people have abut what's going on around them. Some are stronger than others but all provide some level of laughter.

Another immersive theatre experience, but very different and nothing I have experienced before. Inspired by Jose Saramago's novel of the same name, you are blindfolded and taken upstairs to a room. The blindfold comes off and all you can see is white - a white light and nothing else. You cannot see anything else and it took me a few panicky minutes to realise the genius of how they made it happen.
The 30 minute play can be quite confronting with bumping into other audience members and actors and hearing the breathing of others but not being able to see them but it's a unique experience that I would love to re-visit.
There is some work that needs to be done on the story-telling aspect of this show but as a work in development it certainly is very exciting.

9. FREYA BENNETT in THE POSSIBILITY OF FALLING

So this is more of an intimate music gig but the musical arrangements, the story told between songs, the projection of various photos in the background and Bennett's beautiful voice and vocals allowed you to not only enjoy the music but travel off into places of your own creation.
Was very lucky to get into this one as had sold out and it's not hard to see why.
Below is one of Bennett's great tracks, "Emily". 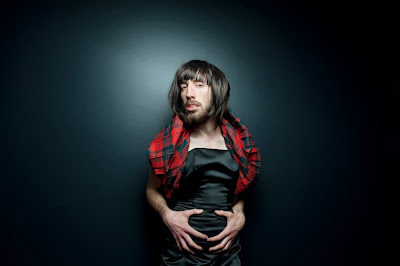 And this is also a love it/hate it show. To anyone who has seen it, I want to be clear in saying I was confronted but I was not offended by the show. Up until THAT point, I really enjoyed it but the last 15 minutes of the show are a blur to me as I was still recovering from that moment which completely blindsided me. I would love to be able to watch this again (prepared) so to fully appreciate it.
Having said that, Mark Wilson is undoubtedly one of the most committed and bravest actors I have ever seen on stage, and he is also very talented.

Two very special mentions to CONFETTI and SEX POETRY BOOTH for their contribution to this years show.

If you didn't go to Confetti - then you really missed out. And it would be unfair to spoil the surprise of this two minute private show that can be anything you want it to be. Hopefully be back next year!

And in the Sex Poetry Booth, Dosh Luckwood - the sex poet that he is - takes five words from your last sexual experience and in 20 minutes has a poem typed up for you to take home and frame. Here's mine: 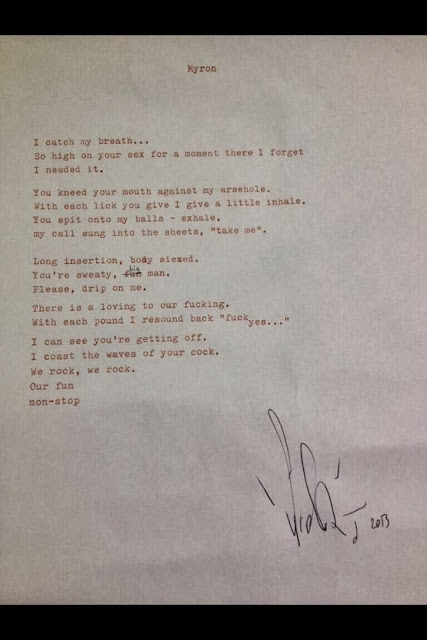