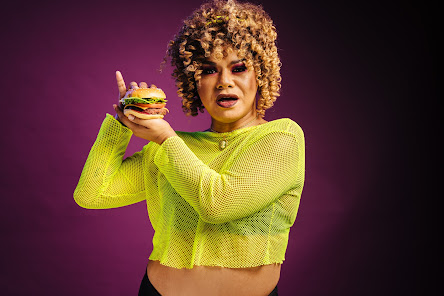 In 2016, a burger was thrown at performance artist Travis Alabanza as they walked along Waterloo Bridge. No one did anything to help or assist. To understand this act of violence, they created a piece based around the burger into a confessional storytelling show with live cooking, and audience interaction to share and highlight the lived experiences of a trans person of colour.

For Midsumma Festival this year, Burgerz is making its way to Theatre Works with Kikki Temple taking the audience through the unique experience that mashes together trans culture and the burger. Through some serendipitous circumstances, Temple, already aware of Alabanza and Burgerz, was put in touch with director Kitan Petkovski about starring in the production.

"I had seen some interviews Travis had done with trans folk on YouTube for Arts Projects Australia that intrigued me, and it was the first time I had heard of them as an artist and their work and this incident of a burger that was thrown at them. I ended up buying Burgerz and read it that afternoon," Temple recalls. "I connected to it so much. The pain and anger in it were relatable but what fascinated me was the way in which the message was set out for the audience in a digestible way. It’s not bashed into their skulls so to speak. My contact details had been given to Kitan by a friend who then asked if I would be interested in working on the piece and I immediately said yes. It was like the universe was pointing me to this work because I didn’t seek it out, it came to me. Which has been a blessing."

While this is based on Alabanza's personal account, Temple has found pieces of herself and her life in Burgerz and thus able to bring a fresh authentic perspective to it. "This could have happened to anyone of us. We all have very similar stories as trans or gender non-conforming people, and as a person of colour these stories get even more alike,” they say. “This has allowed me to look at the work as a part of my story as well because of how it hits home. I can relate having gone through similar incidents. I know Travis is describing an event and their processing of it afterward, but this is also my story and it’s one that needs to be told here in our part of the world."

"What Burgerz is going to do is engage and challenge people to have a little courage to address their perceptions of gender. To look at themselves and look past what one thinks about it and see humanity instead. Once this can be done, the opportunities for understanding and acceptance far exceed the default of how we think," Temple tells me. "If you imagine a burger, you have a picture of it and an expectation of it even before you pay for it. Anything other than what you expect will face critique and influence your thoughts about the burger. The piece reminds us that we do this not only to burgers but also when it comes to gender and how we should look and present ourselves to the world."

Of course, behind every great performance is a great director and Temple and Petkovski's collaboration has been just that, in the truest sense of the word. "I have been made to feel very safe as Kitan often checks in to make sure I’m not being pushed into any space that could be triggering. But because he makes me feel safe, this allows me to go to those places that I’ve felt were scary and to sit in and use parts of me I’ve tried to hide while transitioning," Temple explains. "It has been one of the most liberating collaborations I’ve ever been a part of, and I can’t wait for everyone to see what we’ve been cooking up!"