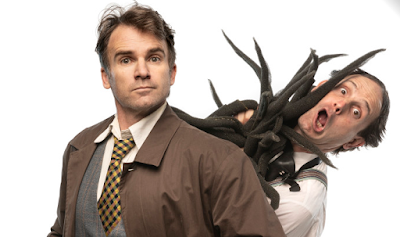 It’s time for some fun fun fun at Fox’s Family Fun Park. There are plenty of animals to see and exciting rides to take in this small, charming town, as long as you can ignore the hungry alien that is devouring everything and everyone around it. Presented as part of the Melbourne International Comedy Festival, Bunk Puppets’ Stark and Dormy thrusts its audience into a science-fiction/horror storyline told almost entirely through astounding shadow puppetry.

While the puppetry is fascinating in its own right, what makes this show even more interesting is that we are able to witness the behind the scenes antics of puppeteers and actors James Pratt and Christian Bagin. Rather than placing a barrier under the screen, Bunk Puppets have left it unobstructed so that we can see all the puppets and props on the floor ready to be used. It is a rare glimpse in how these puppets are constructed and how they drastically change in appearance once they are held behind the screen. It’s quite incredible knowing what the alien creature is made from to then see its menacing form in action.

It is also an opportunity to appreciate the speed in which Pratt and Bagin must switch between characters or scenes and the time between playing the puppets and then portraying the humans of the town, highlighting the skill and concentration the two have. Their audience interactions within the contexts of the world they are creating further immerses us into the plot and strengthens our attachment to the oddball of characters, however some more character development and exploration of the relationships would assist in a stronger emotional response during the climatic conclusion.

As the story escalates, so too do the special effects and the finale is a brilliant moment in theatre that has you feeling like you are caught in the middle of the panic and chaos that falls upon this small town. The technical feats extend beyond the lighting design with the sound design constantly working alongside the story to set each scene and build the tension as needed.

Stark and Dormy is not your typical laugh-a-minute comedy festival show but what it is, is an impeccably crafted piece of theatre that is bound to capture the attention and engage the imagination of all who see it.

Image Credit: Andrew Wuttke
Posted by Myron My at 15:13