She Wrote the Letter review 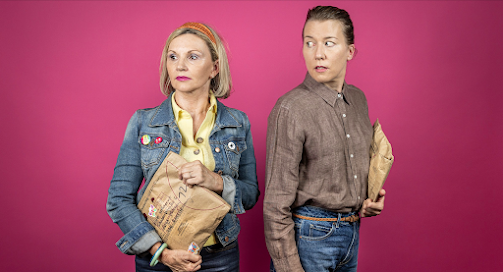 In 1979, two teenagers from opposites sides of the world began writing to each other as pen pals. That friendship would see Ute from East Germany and Tania from New Zealand sharing their dreams and aspirations, their joy and grief, and their families and lives for over four decades. She Wrote The Letter brings this real life correspondence to the stage, gently dissecting how friendship fosters strength and hope when we need it most, and the profound impact that such people can have on us.

Playwright Kieran Carroll, presents the information and events covered as letters being read aloud (although this takes a conversational style at times), as monologues to express thoughts and feelings or through more traditional theatre with the two people speaking on the phone or face-to-face encounters. It would not be the easiest of tasks to squeeze forty years of friendship into an 85 minute production but what Carroll includes captures everything the audience requires to understand how deep this relationship runs between Ute and Tania. Most interestingly, Carroll uses historical happenings like the fall of the Berlin Wall and Princess Diana's death, as not only timestamps but also as ways of reminding us how external factors influence these two women and the bond they share.

Through her considered direction, Cathy Hunt does not rush the story and allows for smaller moments to have weight and purpose so the audience gains a sense of time passing. With the actors playing 14 year old versions of themselves up to their fifties, movement and posture paints a clear picture of their ages and of what they are experiencing in their lives and in their respective countries.  Musical cues and advancement in technology also guide where we are with these two women.

Maria Noredenberg is brilliant as Ute, showing her yearning for the freedoms and choices that Tania has available to her. Her performance when we see her at a Tina Turner concert speaks volumes about the significance this has for Ute. Tania McNaughton not only performs as Tania but is also the Tania that She Wrote the Letter is based on, and you can immediately feel the confidence and intimacy that comes with playing yourself. McNaughton shows her carefree but slightly naive younger self as well as the more steadfast older version of herself.

The set and costume design by Grace Mallinson realistically depicts these women’s worlds, and much like their friendship, presented together yet separately. Ute's home is organized and everything is in its place with practicality over comfort. Tania on the other hand is messy, with bright coloured stationery and a beanbag to curl up in. Harrie Hogan's lighting design further distinguishes the two environments, with Ute's being quite dull and providing warmth with a sharp border surrounding her while Tania's is lit in glaring brightness that blends into the rest of the floor.

There is simplicity to She Wrote the Letter with its letter writing approach but within this production, there are many layers to uncover. It's a sensitive and reflective staging of a story specific to two people but brings with it universal appeal. An absorbing production that is well worth the delays it has had in getting to the stage over the last few years.