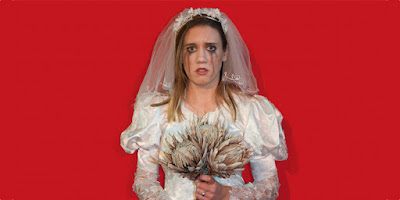 Here comes the bride, all dressed in white. Your wedding should be one of the most memorable days of your life but for comedian Nadia Collins, this is most definitely not the case. In her new show for the Melbourne International Comedy Festival, , Collins finds herself in a predicament that has her facing a transformation that she never thought possible. Blending physical theatre into an immersive environment, The Bride will have audiences eagerly waiting till the very end if she makes it to the altar.

Collins' The Bride was inspired by Franz Kafka's novel The Metamorphosis, where a salesman wakes up one morning to see he has been turned into an insect. "My show however is about a bride who turns into a cockroach on her hen’s night. I’ve always been interested in The Metamorphosis as a story and the themes it raises. I love the idea that deep down we’re all cockroaches," she says.

While this is a solo show, Collins has worked alongside many comedians and performers in order to ensure all the elements satisfactorily come together, which she continues to tweak throughout the season. "I usually get an initial image which is really clear and then I get an “aha” feeling, where I know it’s the inception of a show and it grows from there. Often the whole arc will write itself one night when I can’t sleep, but then I’ll trial small bits at an experimental comedy evenings," Collins explains. "Then I’ll work with people I trust and respect creatively to make everything better and better and with this production it has involved several people (Andrea Gibbs, Shane Adamczak, Cam Venn, Kyle Walmsley, Ben Russell, Luke McGregor and David Callan) who I vibe with where the outcome would be rubbish without that collaboration. Once it's on, I am crafting it at every performance, based on what’s working and what isn’t working."

There is also plenty of interaction and engagement with the audience in The Bride, all helping her to get to the wedding on time. It's the skills Collins has learnt through her years of improvisation and clowning that guarantee each show is a delight for her audience and herself. "I think especially the clown training I did in France at Ecole Philippe Gaulier has been the most useful for me, but having that improv background has helped me explore my physical comedy in front of an audience and keeps me responsive to them."

1) When did you realise you were funny?
Haha, I still don’t know. Sometimes you’re funny, sometimes not. I was a very playful and sort of cheeky child and I think that cheekiness is the essence of my funny.
2) What is your favourite word?
Perspex. I just think it sounds great.
3) If you were arrested with no explanation, what would your friends assume you had done?
Oof. Probably that I’d gone too far with a drunken party prank.
4) If animals could talk, which would be the rudest?
Cockroaches, don’t you think? They’d be very base and vulgar. They have no airs or graces.
5) Which character from a TV show most reminds you of yourself?
Probably Norm from Cheers.