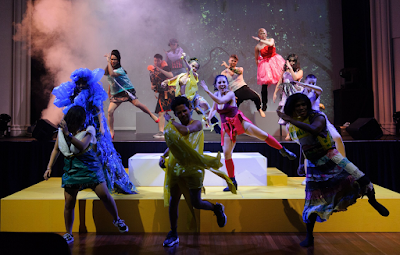 It was seven years ago when I saw Kids Killing Kids but I remember it so vividly. The show reflected on a previous collaboration between four Australian theatre makers (David Finnigan, Georgie McAuley, Jordan Prosser and Sam Burns-Warr) and a Filipino theatre group, Sipat Lawin Ensemble, on their season of Battalia Royale. This was based on Japanese writer Koushun Takami's novel Battle Royale, in which high school students are pitted against each other in ways that would give the tributes in The Hunger Games nightmares. It proved to be extremely popular with thousands of people eagerly flocking to see it but also extremely controversial with its immersive depiction of violence. Fast forward to 2020 and the ensemble has brought its newest show to Melbourne, Are You Ready To Take The Law Into Your Own Hands.

This time round the controversy surrounds the kidnapping of the biggest star of the Philippines, and it is up to three women to rescue her: Selina (Ji-ann Lachica) a social media influencer, her older sister Sanya (Claudia Enriquez) and police officer Sophia (Adrienne Vergara). There is action aplenty as they face-off in rap battles, dance challenges, underwater fighting and encounter corruption at every corner in order to free Gracielle V. Their personalities and circumstances might be outlandish but committed performances by the actors allow for honest and authentic characterisations to develop.

As this is occurring, Finnigan - joining forces with Sipat Lawin Ensemble once more - portrays a representative from DFAT who have collaborated with the show's director (JK Anicoche) to bring this work to fruition as a way of building the relations between the two countries. This play with illusion and reality is the basis of the entire production and even with its exaggerated and extravagant style, it is confidently and intelligently executed that leaves a significant impact on the audience on the state of politics in both countries.

The complex narrative threads could easily have turned into a confused mess but Finnigan knows exactly the story he is telling and has complete grasp of every scene, every character and every sentence he writes. There are moments that are simultaneously surprising, hilarious and provoking and he never loses sight of the bigger picture. 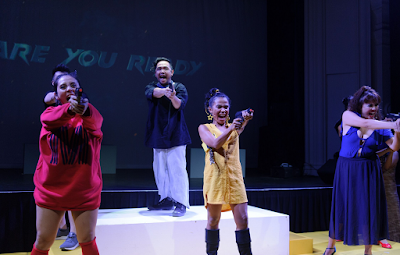 However, it's not just the writing and performances that are flashy and big. The music by J Laspuńa and choreography by Jared Luna are full of energy and you can’t help but get swept up by the moment and believe you are at a pop concert. The details to the environment are highly engaging with well-suited scene changes supporting the fantasy we are witnessing. This is further strengthened with the placement of four large screens around us, projecting live feeds and video recordings throughout. There is no escape from this heightened world and it’s impossible to not feel part of it, for better or worse.

We are told from the get-go that this show is not political. Nudge nudge hint hint wink wink. Because if Are You Ready To Take The Law Into Your Own Hands is not political then I have no idea what is. Underneath the musical numbers, the dazzling costumes and the incredible tale, this is a cutting condemnation of politics in the Philippines, Australia and the world. As much as a spectacle that this show is, it’s also a critical look at what our politics says about us.

Photo Credit: Sarah Walker
Posted by Myron My at 14:01