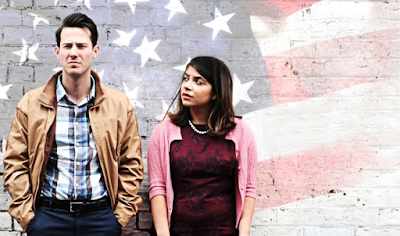 Dogfight, based on the 1991 River Phoenix film, revolves around the actions of three marines on their final night in a small town in 1963, just before they are to be deployed to Okinawa, and then on to Vietnam. While the trio come from seemingly similar backgrounds, they are friends bound by circumstances of war. Over the course of this night, these bonds are tested, especially when Eddie meets the naive and innocent Rose.

The original production of Dogfight, with book by Peter Duchan, premiered in New York in 2012 and won the Lucille Lortel Outstanding Music Award as well as being nominated for a number of others. However, so much of the show feels outdated, and unfortunately there is nothing new or especially engaging being offered by this story – whereupon even those who are not familiar with the film itself can see exactly how things are going to pan out.


The score by Benj Pasek and Justin Paul is fresh and fun to listen to, and under the capable musical direction of Trevor Jones here, the highly talented five-piece band brings their work vividly to life. The lyrics however were a disappointment. They felt clumsy and uninspired, and didn’t really offer much insight to the characters’ thoughts that wasn’t already evident from the book. The strongest numbers are the opening song, “Some Kind of Time”, “Come to a Party” and “Pretty Funny”, the latter finally allowing us to feel what the characters really were.

Alexander Woodward tackles the difficult role of Eddie, whom the audience must somehow simultaneously like, while being repulsed by his actions. Unfortunately, the journey Eddie goes on did not feel fleshed out enough here, and as such, prevented the complexities required of this problematic character to come through on opening night. The changes and realisations he has never seemed to come from a place of understanding and growth and ultimately felt forced. However, Woodward certainly generates some nice moments in his scenes with Olivia Charalambous (Rose), and the duration of their date beginning at the restaurant until their farewell encompasses some of the best moments in the show.


Charalambous has a great energy on stage and her rendition of “Pretty Funny” was a touching and genuinely emotional scene. Jaclyn DeVincentis adds some excellent comedic timing in her portrayal of Marcy and the honesty with which she plays her is warm and well-grounded, so it’s a shame (but understandable given the role) that she did not have more time on stage. The ensemble are full of vigour, and the choreography by Leanne Marsland brings forth the bravado and aggression we can see would have been rampant during that era.

It’s great that Doorstep Arts are willing to champion lesser-known musicals, and Dogfight does endeavour to look at marine life and how young men’s lives were and are forever changed by needless war. While there were strong performances in this ambitious production and good musical numbers, at 2.5 hours long I admit though that I expected richer character development and a more engaging book from an award-winning work.

*Original review appeared on Theatre Press on 9 May
Posted by Myron My at 18:29