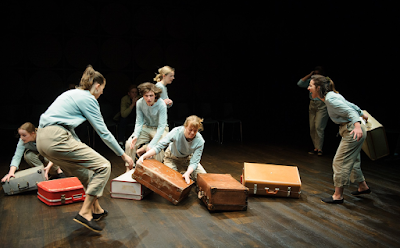 Outside the venue of Forgiveness are a number of vintage suitcases set up in three piles. Each pile has an open suitcase with a question written on it in relation to the show's title. One, for example asks, “is there anything you wish you hadn’t forgiven?” We are encouraged to reflect on these questions and write down our answers before placing these papers into their respective case. And so we begin to ponder what hand forgiveness has played in our lives. As we do this, a roving performer holds a suitcase on his back, struggling to walk around the foyer with the heaviness of the object he carries. Presented by Monash University Centre for Theatre and Performance and Barking Spider Visual Theatre, Forgiveness is a reflective piece of visual theatre, exploring forgiveness through an individual and a national lens.

Once we are seated, a group of people enter with a suitcase in their hands and hopeful wide eyes and big smiles. They are identically dressed in sky blue long sleeve tops and beige pants. There is a buzz of excitement and joy as the arrive at their destination with their chatter and laughter filling the room, which is amplified by Ryan Mangold's immersive sound design.


The use of suitcases as a representation of the baggage we come with is an inventive way to play with the idea of national experience and forgiveness, but in its execution it doesn’t carry a great deal of weight. The biggest obstacle with this work stems from the decision to have the characters speak in a “foreign” language. Despite the fluency and confidence the cast display in this gibberish tongue, the meaning behind what they are saying becomes unclear and the words and expressions start to feel exaggerated.

Similarly, the over-the-top manner in which emotions transpire leans more into comedy than sincerity, so any inferred understanding we make has little impact on us. At one point, a person angrily throws her suitcase to the floor and then a second later she frantically grabs it like a distraught mother being reunited with her missing child. Why? At other times, they are upset and then they are happy and they express fear and bravery but the why is never clear which makes it difficult to appreciate the performance.

There is much to admire with Forgiveness particularly with its intelligent direction and the impressive physical ability that the actors bring to their roles. There are some gorgeous visuals created from the cast, props and lighting, but there is surprisingly not enough dissection happening beneath the surface. In its attempt to try and look at a universal forgiveness it seems to have cut itself off from the intimacy a production such as this requires.